Does your faith make you uncomfortable? It should. Jesus wasn’t comfortable. He struggled with temptation, He was cold, hungry and tired, sometimes He was frustrated enough to toss usurpers out of His Father’s house by violent means. He risked censor by correcting the churchy, judgey people of His day in public settings. They tried to stone Him a couple of times and then they nailed Him to a cross to kill Him in a very cruel way. He then died with the sins of the world seeped into His very flesh. Our Savior was not comfortable:

Jesus promised us that we would be as uncomfortable as He was – the world would hate us, we would struggle with our efforts to be His followers, sin would dog our steps.

If your Christian faith does not make you uncomfortable with the world around you and how you interact with it, then something is probably wrong with your Christian walk. Being a Christian in this world ought to feel a bit like having sand in your shoes.

I want my readers to think about the soldier sitting next to them on the pew – the guy who just got back from the Middle East. Sure, he’s a nice guy and his wife is wonderful. His kids love him and he can quote Scripture. Nothing wrong with any of that. I take him at his word that he is a Christian who walks with Christ every day. Now think back a month or two. What is the job of a soldier? Killing and subjugation of a foreign population. Cut away the politics that took our pew mate to that foreign country and just ask yourself “What would Jesus have said about what this guy was doing a month ago?” Would He have automatically said “Thank you for your service”? I doubt it. I think He’d probably have written the number of the man’s kills in the sand before saying “I forgive those who repent of their sins.” Imagine how uncomfortable that soldier would be as he watched Jesus writing in the sand. Imagine how uncomfortable you would feel watching that if you’d just thanked the soldier for his service. I want my readers to think about the people the soldier killed or subjugated and feel compassion for them, but I also want my readers to think about the scars on the soldier’s soul that were inevitable from that behavior and feel compassion for the soldier. I don’t think Jesus would forgive the soldiers and damn the subjugated based on politics and that’s an uncomfortable thought.

I used this example because I have a lot of friends who are or were in the military and that works its way into my books. I could have used almost any example where our lives outside the church conflict with our Christian faith … those points where we ought to feel uncomfortable but often don’t. You could substitute bar owners, prostitutes, cops, pharmacists, authors … the list goes on and on. Everyone of us has tensions between our faith and our “regular” life and we ought to care about that. But, in our consumeristic society, being comfortable is the chief societal goal and so those authors who seek to market themselves as “Christian authors” feel the need to make their audience comfortable. That is a smart marketing decision that avoids controversy and topics that might make their readers think about uncomfortable ideas.

Is that actually a ministry or is God calling us to something higher … to be the prophets to our society through our narrative talents? Can we entertain readers while teaching eternal truths in a palatable form?

I suppose that depends on how uncomfortable we’re willing to allow God to make us. 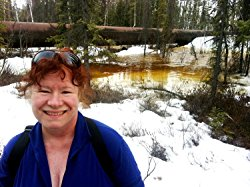 Lela Markham is the pen name of an Alaskan novelist who was raised in a home built of books. Alaska is a grand adventure like none other with a culture that embraces summer adventure and winter artistic pursuits.

“I don’t seek to be known as a Christian author, but as an author for whom Christ is so central to who I am as a person that He shines through.”

One thought on “Sand in Your Shoes, by Lela Markham”

This site uses Akismet to reduce spam. Learn how your comment data is processed.